I log onto Eve to find the home system quiet again. A ladar has presented itself and I decide to test out one of those new mining frigates. Snow has managed to harvest one cloud already and I’m left with a simple 5,000 unit C-28 for myself. The frigate performs marvelously. I just have enough time to restring my guitar before the cloud is put to bed and I begin searching for new ways to get into trouble.

I’m not too excited about our static. We’re in Caldari faction warfare and these systems are hot. Especially during the weekend peak hours. There are large roaming gangs of ships and they have no problem making a pit stop to pop you’re ship if they think you have anything even remotely valuable on you. I decide to use my Oracle and try to pop a few rats for some security gain.

I roam from system to system looking for rats while also trying to avoid gates. In order to use a gate you need to get close, and the Oracle likes to stay far away from everything. A well setup gate camp on and this ship is toast. I’m starting to get nervous with all the activity and decide to jump to a non-contested system in the hopes that it’s less busy. Of course as I emerge on the other side of the gate, I’m greeted by a Tornado 155 km off the gate with a Helios pumping up it’s scan resolution.

This is a pickle, two sniper ships separated by 155 km of empty space. I’m not confident enough in my damage output to want to engage him. The gate guns are also tantalizingly close and I’m not familiar enough with how they decide who to shoot when two ships are in combat. The sniper Oracle is fit specifically to have high agility to get out of situations like this. I bank on my fit, and align to warp as quickly as possible. The Tornado locks me and lets loose a volley which vaporizes my shields and takes a quarter of my armor with them. It feels like ages, but the Oracle finally enters the warp bubble and I reach the safety of a local station.

After a quick repair I’m back in the home system and thinking of how I can grab myself a sniping Tornado. I decide the Purif-i-core is the perfect ship. The cloak will allow me to get through his blockade while also sneaking up on his position. Assuming that is he’s still sitting in the same spot. I make my way back there and sure enough he’s there. I warp around a little to get myself as close as possible. I set my orbit distance and begin a slow stealthy approach. The whole while I’m still very worried about the gate guns. My Purifier hull won’t last long against those guns and I’m not sure if engaging him will bring about their wrath. He has a red background and white skull, whatever that means. The fucker shot my ship, I don’t see why the police would mind if I return the favor. 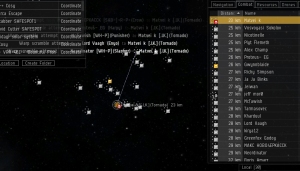 Just then a fucking shit storm arrives. At least 30-50 ships jump through the gate. They warp off in quick succession but surprisingly the Tornado fires off a couple shots. I can’t believe he’s engaging anything with this many potential hostiles in system. Why are you not running away!? Surely he’s at his keyboard. I can see the howitzers launching projectiles down range. I don’t know what this guy is doing but I know what is about to happen. I reverse thrusters and put as much distance between me and the Tornado as I can before the whole roaming fleet warps into his position.

Sure enough all hell rains down on the Tornado. It’s far from a fair fight, and farther still from one the Tornado should have been in. I’m not sure what his screen was showing him, but as soon as more than two ships came through that gate I would have been out of there. A lesson in vigilance and thinking ahead. Especially while camping a gate, you have all the time in the world to develop a plan for scenarios like a blob coming through your gate. Oh well. I didn’t get a kill but I saw some hilarious shit go down.

On top of that kudos to the ‘Help’ channel in Eve. I spoke with a few very helpful guys from that channel while I was getting ready to attack the sniper. The information they gave me on kill rights in lo-sec and how gate guns work was very helpful. I’m going to attempt to summarize what I learned at the bottom of the post here:

A flurry of activity this morning has more than made up for the last few weeks of inactivity. I started off the morning in my Pilgrim hunting in Gallente FW space. Things were going fine. I even managed to catch an Imicus speed tanking a major complex by himself, while afk. That adds up to a simple frigate killmail for me! As I’m congratulating myself on the clever kill, I had stalked up to the orbit path of the ship while cloaked, Oz asked to help him out in a lo-sec deadspace complex in our static. I think I have time for that and it sure beats spending hours hunting elusive T1 frigates.

I head back to the HQ system and swap ships for my Legion. My beautiful Legion of invincibility. I jump back through our static wormhole and join Oz in the destruction of many Gallente NPC pirates. As we finish up the last room Snow logs on and helps out by grabbing a Noctis and sweeping up our mess. We’re just getting started when Oz notices combat probes on the scanner. Snow aligns for the wormhole and I drop a can so I can start to orbit the acceleration gate’s drop off point to intercept anything that might cause trouble. Oz positions himself on the front end of the acceleration gate to give us a heads up if someone does show up. 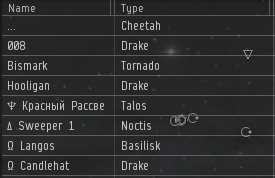 Only a minute passes before Oz calls out that ships have landed on the acceleration gate. Snow warps out as Oz joins me in the first room of the complex. D-scan is showing a Tornado, Talos, and Drake on scan. A Drake on Drake brawl sounds slow but doable, and I’m positive I can easily handle the Talos and Tornado on my own. Oz asks if we’re going to engage or run. I make the call to fight it out. These ships shouldn’t be a problem and my bloodlust is up from my earlier kill.

I believe there is a quote from someone famous that I can’t recall with enough precision to find it on google, but it goes something like, No man goes to war believing they will lose.

I should have kept that in mind. Obviously a secondary fleet was in waiting. Why else would they have attacked with three outclassed ships? Regardless it was too late to think about it now, as the third and fourth Drake warped into our position along with a Blackbird. The Tornado was destroyed easily, and we managed to drive a few other ships off before finally succumbing to the punishment of all those missiles. The Legion fought bravely, I couldn’t have asked more from her. But in the end even her armor wasn’t enough. Oz lasted another minute or so before joining me in the HQ system in a pod.

I didn’t mind losing the Legion, that’s what combat ships are for. I didn’t mind losing the skill points for not ejecting before it detonated. Four days of training again to me isn’t worth the possibility that they could fly my Legion home. One thing that did bother me is the half a billion isk armor repairer module which was unscathed in the attack and I’m sure met with much enthusiasm by it’s new owners.

No I didn’t mind losing. It was a fun battle, and the Legion will be built again and again as need be. But it is important to remember that with every defeat comes a lesson, and it is important to make sure that your emotions after the fight do not prevent you from learning it. Mine was to assess the situation a little more carefully before engaging. In truth we should have pulled out of the system as soon as we saw the probes, but I think we were both having an itchy trigger finger. We should have realized the backup fleet was just outside system though. Even without a scout to think a corp with only three members in relatively weak ships would engage our forces was absurd. I should have seen through their deception as the acting fleet commander. It will not happen again.

Search Capsule in the Void: