So finally spent some time in the capsule with the corp. Man I have been missing this. Even if I didn’t know it at the time. Let’s get in some pvp ships and hit the…

Oh right we need money. Everyone needs money, all the time. But It’s what we gotta do so we gotta do it. It’s pretty fun though I have to be honest. Maybe not the most exciting activity in the world, but the lasers are pretty and you honestly feel productive killing rocks. So the corp mines for a while, but the whole time this lo-sec connection to FW Caldari space is nagging at me. I know there are some frigates zipping around trying to plex the FW sites and my Oracle, although not looking like it from the outside, is superb at picking off quick frigates before they know they’re getting locked.

So once the corp cools down for the night I go looking for trouble. The sad thing is I had just spent a bunch of time getting my security status back into good shape. Worst part of lo-sec is the security hit for killing people. I realize it makes sense for most people, but I really like hunting in lo-sec but really hate ratting to make up for the security hit. But as per usual, my blood lust gets the better of me. I spend some time scanning around the system looking for prey, none of whom seem concerned that a Battlecruiser is among them. Thing about FW pilots is they’re usually so distracted with FW, understandably so, they don’t notice a single non war-target pilot cruising around the system with them.

Anyway, nothing seems to be working for me. The ships don’t seem to sit still for too long, and the speed with which they are closing the FW sites down is pretty high. So I decide to do what any good Amarrian would do in such a situation. I set a trap. I scan up a nice fresh small outpost for all of the system to see, and then immediately get myself about 150 km away from the warp gate aligned towards the wormhole. And I wait. But not for long. 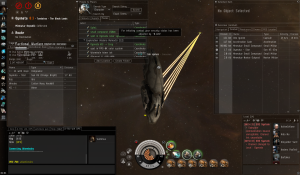 I’ll give these two some credit, they had clearly scanned my ship before they warped to the site. Knowing the Oracle is a sniper ship they warped in at 100 km hoping to get close to me and kill me. Unfortunately I’m not aligned on the same plane as them, and they’ve ended right in my kill zone. Zap. Zap. Two kills in about 20 seconds. Only three volleys. The kills were pathetic noob ships, but I mean hey it was fun. The ruthlessness of the killings made up for the lack of loot or showmanship. Damn it! All the time ratting for security status wasted! I’m back to where I started it. Oh well, a null sec wormhole opens up soon enough and I’m able to get the sec back relatively quickly. Hopefully we get some more null or w-space action soon!

I have been gone for a long time. I’ve had some shit going down in real life and unfortunately Eve had to get put on the back burner for a while. RL is still a shit show but I think I’m at a place again where I’m starting to get back into the pod. I’ve been playing again for a bit and I had forgotten how much fun the game can be. For a while there it really did feel like a second job. And oddly having a blog was a lot of pressure, although totally self-imposed, to constantly play and not just play, but play until something really interesting happened. It started becoming too consuming and I eventually burnt out. But that seems to be how my Eve playing goes. I’ll get really really into for a year or so and then burn out only to come back a few months later. I envy the people with the resolve and attention spans to keep going constantly. I wish I had that ability.

Anyway I’ve been roaming a little in some frigates and tech 1 cruisers and having a great time again. Playing with the corp makes all the difference in the world, and now that I’m single again (that’s right capsuleer-ettes, back on the market), I should have time during the midday to play with those crazy Europeans. I’m taking a really big interest in the tech 1 frigates, destroyers, and cruisers again. I have almost all the skills I could use for these ships maxed out and I’m having a lot of fun tinkering with fits and more importantly how to actually fly them.

So long story short hopefully some of my very limited readership is still around and hungry for more odd adventures in the void. I know I’m excited to get back into the swing of things!

Search Capsule in the Void: